Common combinations – carboplatin plus what?

Carboplain is often used as part of a combination chemotherapy regimen.

Doctors select a combination of drugs, each of which has some effectiveness against the target disease by itself. The two drugs have different mechanisms – e.g. They aren't both alkylating agents or antifolates. The organ system that gives out first when doses are raised, for instance bone marrow, lungs, or kidneys – these should be different between the two classes of drugs so high doses of both can be given. Many combinations of chemotherapy agents have been found to produce better success than the individual components. Remission rates can be substantially higher. This is the philosophy behind combination chemotherapy: combining drugs with different mechanisms and different toxicities (dose-limiting) can produce a bigger therapeutic effect at the maximum dosages for the two drugs.

When docetaxel or paclitaxel are combined with carboplain, they are administered first. This helps limit myelosuppression and enhance cytotoxic efficacy. A recent clinical trial showed a combination of carboplain and paclitaxel can be effective in treatment of all histologies of non-small cell lung cancer. Another study on lung cancer found a combination of pemetrexed and carboplatin had benefits.

Alkylating agents are different from other chemotherapy agenst in how and how much resistance the body develops to them. Even with prolonged exposure, the increase in resistance is limited even after repeated treatment. Alkyklating agents are more like radiation in that respect. 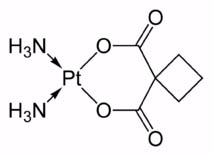